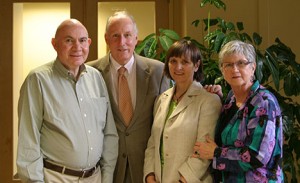 Today is known as Yom HaShoah, a day when Holocaust martrys and heroes are honored throughout the world. It is also the 67th anniversary of the liberation of Auschwitz-Birkenau Concentration Camps, where millions lost their lives, primarily because of their faith. There are so many victims of the Holocaust that it boggles the mind. There are also many saviors, individuals who risked their very lives, and that of their families, in an effort to reach for the highest moral ground and protect those being subjugated. Those non-Jewish individuals who saved Jews (for no reward) hold the designation of being called “Righteous Among the Nations,” an honor bestowed only by Yad Vashem, The World Center for Holocaust Research and Education in Jerusalem. It is impossible to say how many individuals saved Jews, as many were executed, along with those they were saving, for their humanitarian efforts.

I recently had the privilege of visiting with a friend, Virginija Vasiliauskiene, whose mother, grandparents and uncle saved eight Jews from Kovno Ghetto in Kaunas, Lithuania, during the Holocaust. Those four individuals were subsequently declared “Righteous Among the Nation.” Virginija and her husband, Barry Mann, live in El Paso. I have visited in their home and they were my house guests recently. They have played a very important part in my life. Barry, a South African Jew, met and married Virginija, a Catholic, several years after he learned of her family’s history. Barry’s mother was born in Kaunas but escaped the Holocaust by moving to South Africa. Virginija still maintains a residence in Kaunas and I have stayed there on both of my visits to Lithuania. The two of them have been extremely supportive of me over the years. I met them through Gadi Shlom, who lives in Israel, the son of my beloved late friend, Emmanuel (Mannie)Shlom. Mannie was one of the little boys I wrote about in “Izzy’s Fire,” and we developed a special relationship while I was writing the book. 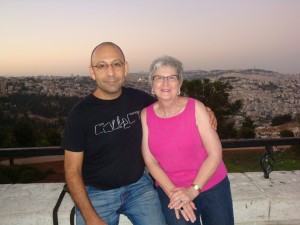 Gadi Shlom and Nancy in Israel

While the Manns were in Richmond, I had the privilege of taking them to visit the Virginia Holocaust Museum, to meet several of my friends and also to meet Steve Neill, editor of the Catholic Virginian. Steve spent a long time interviewing them, and an article is scheduled to published in that newspaper very soon. One of the Jews that Virginija’s family saved is Henry Kellen. Henry, now 97, established the
El Paso Holocaust Musuem and I had the privilege of speaking there some time back. Because of my respect for Barry and Virginija, I donated a case of books to the museum so they could use “Izzy’s Fire” in their trunk initiative, a program where a teacher borrows a trunk filled with Holocaust literature. When the class has studied the information, the trunk is returned to the museum for other teachers to use.

It is my sincere hope that through studying historical books and documents, the students of today will be able to see the world in a more global sprectrum and become more understanding of their fellowman. It is, in my opinion, our only defense against a future Holocaust.