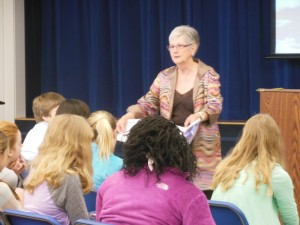 Students at St. Michael's Episcopal School showed keen interest about the editing process of "Izzy's Fire." Our discussion followed a PowerPoint presentation where I shared multiple photos I had taken while in Lithuania.

Several events have taken place since I last posted on this site. I’ve been traveling a great deal, which makes it difficult to post consistently. However, I want to thank three different groups who have been kind enough to invite me to speak. The first one is St Michael’s Episcopal School, which is near Richmond. The students were so respectful and many asked insightful questions. The appreciation they showed, along with wonderful enthusiasm from their teachers and librarians, made me glad that I’m still interacting with school groups. It also gives me hope that these children (our future) will go forward with more knowledge of how to be more tolerant of those who are different. 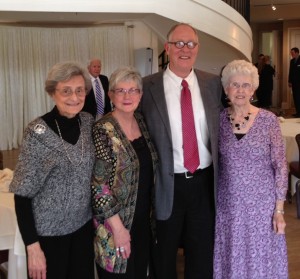 The Catholic Woman’s Club (Richmond) asked me to  be the speaker for their bi-annual author’s luncheon where they raise  money for scholarships.  My presentation had special meaning for the group, since it was a Catholic farm family who risked their lives to save the 13 Jews I write about in “Izzy’s Fire. I asked Simon Sibelman, the executive director of the Virginia Holocaust Museum, to share the time I was allowed. A noted scholar on the Holocaust and wonderful speaker, Simon offered special insight into the subject.

A third, and very special event, took place April 7. As a Christian, I was humbled to be the keynote speaker at the Yom HaShoah program for the Jewish Educational Alliance (JEA) in Savannah, Georgia. The service to commemorate Holocaust Remembrance Day  is observed as Israel’s day of commemoration for the approximately six million Jews who perished in the Holocaust as a result of the actions carried out by Nazi Germany and its accessories, and for the Jewish resistance in that period.

Drawing on my life as a farmer’s daughter, I chose to speak on my memories of farm life and how my father taught me to sow seeds and carefully tend the tender plants. It is my hope that “Izzy’s Fire” can be used to sow the seeds of tolerance. My presentation followed a very moving candlelight service held to honor memories of loved ones lost during the Holocaust. Prior to the service, the names of victims had been read aloud for many hours. The hallways in the building were graced by numerous pieces of art supplied by children from Ramdam Day School and St. Vincent’s Academy, their powerful work giving special significance to the event. In the photo below, Jennifer Rich, director of programming for the JEA and the Savannah Jewish Federation, paused for a moment to appreciate the art with me and Rabbi Robert Haas, rabbi of Mickve Israel, the third oldest Jewish congregation in the United States. Rabbi Haas had just closed the Yom HaShoah service, attended by about 300 people, with the Mourner’s Kaddish Prayer.