Several notable events took place in 2012 that I need to update. A book trailer for “Izzy’s Fire” was finalized and added to the banner of this website. Please have a look and be sure to share with your friends.

The Summer Language Institute at the University of Pittsburg provided a scholarship so I could take a second course in Lithuanian, while a friend supported my living expenses while I stayed in Pittsburgh. I can scarely believe my good fortune.

Dr. Simon Sibelman became the new director of the Virginia Holocaust Museum (VHM) here in Richmond on July 1 . He continues to impress as he moves the museum forward in a variety of new directions. I wrote about him in my monthly column (Reflections, July 2012 – Richmond magazine) You can read the column online by going to http://richmondmagazine.com/?articleID=9f4d. 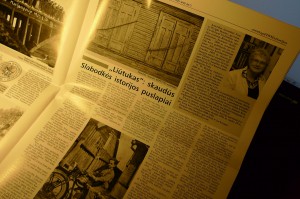 I was pleasantly surprised in September when “Nemunas,” the noted arts publication in Kaunas, Lithuania, requested photos and an excerpt from my young adult historical novel, which hasn’t been published yet. Titled “The Little Lion,” the book is set in Kovno Ghetto and details the bravery of Labaile Gillman, a Jewish teenager who saved several family members from certain death. My agent hopes to have a publisher soon. Translation and organizational work of the excerpt was orchestrated by Nomeda Repsyte, a dear Lithuanian friend (from Kaunas) who has supported me wholeheartedly since we first met several years ago. One of Nomeda’s photos also appeared in the article. It proves to me that Lithuanians are very much interested in their past history.

That was proven to me in spades during November of last year when Skaiste Aniuliene, Consul General of Lithuania in Chicago, invited me to speak in Chicago and also in Michigan at several commemorative events marking 2011 as the Year of Holocaust Remembrance, so designated by the Lithuanian Parliament.

At the same time, the Consul General also premiered a film by Rimas Markunas, a native Lithuanian, who orchestrated a documentary of a Lithuanian man saving several Jews, ultimately resulting in him being named as Righteous Among the Nations, an honor bestowed on non-Jews who risked their lives to save Jews during the Holocaust. Rimas and I became friends during my first visit to Lithuania, when he had just begun making the documentary. I was privileged to share the film with the Consul General and thrilled that she made it available for the first time to U.S. audiences prior to my presentations. 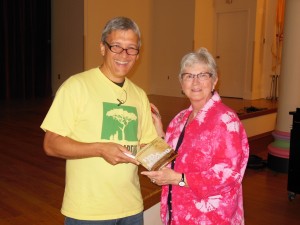 Carl Wilkens, Co-Founder of World Outside My Shoes, signs his book, "I'm Not Leaving," during a break at the LaFrak Conference.

Educational conferences continue to hold special appeal. In October I attended the Ethel LaFrak Holocaust Education Conference in Greensburg, PA. The kind folks at Seton Hill University, who coordinate the conference every three years, offered “Izzy’s Fire” for sale through their bookstore as well. A special highlight was a attending an exhibit of paintings by Sam Bak, an internationally known artist and Holocaust survivor of Vilna Ghetto in Lithuania. I had the joy of meeting Sam while I was in Lithuania a few years back.

Another highlight was meeting Carl Wilkens, the only American to stay in Rwanda  during the genocide of 1994. His book, “I’m Not Leaving,” makes for riveting reading. He will return to the Virginia Holocaust Museum this summer to offer a presentation from his ongoing work. 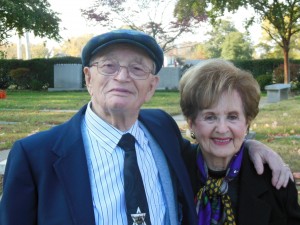 I continue to speak publicly about “Izzy’s Fire” and am always inspired by students who tell me that they continue to learn from it. I’m delighted to report that the book is still being taught in many classrooms, especially the eighth grade. The Virginia Holocaust Museum also uses it as a text for the Holocaust education classes offered through the Alexander Lebenstein Teacher Institute at the musuem. The graduate-level course is taught each summer in conjunction with the University of Richmond and offers CEUs to teahers who attend.

In early November 2012, my heart was touched anew as I attended the annual Kristallnacht ceremony at the Emek Sholom Holocaust Memorial Cemetery here in Richmond, VA, organized every year by Inge Horowitz, a dear friend and someone I consider as a gift from God. During that ceremony, in November 1997, I first heard Alan Zimm recite the names of his lost loved ones who had perished. I left the cemetery that day knowing that my life, as well as my work, had been changed forever by that gentleman’s soft voice. It has now been 15 years, and my work remains unfinished. It was wonderful to see Mr.Zimm and his wife, Halina (also a survivor), at the ceremony this year. It gave me a chance to remind him, again, of how his experiences continue to act as inspiration for me.

Another notable appearance happened in November 2012, when the Jewish Educational Alliance in Savannah, GA, asked me to speak during a luncheon. The event was memorable because of the individuals I met but was made even more memorable because I was also able to tour Mickve Israel, one of the oldest synagogues in America. 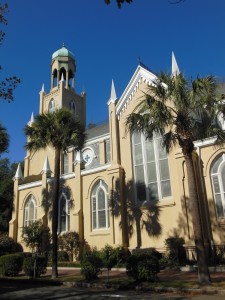 Mikve Israel, one of the oldest synagoges in the United States, is located in Savannah. 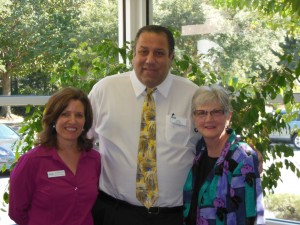 Jennifer Rich, Director of Community Programs and Adam Solender, Exectuvie Director of the Jewish Educational Alliance in Savannah, GA, agree to a photograph on a picture-perfect day in November.