Looking Back at 2017 With Gratitude

As the year winds down, I look back with so much gratitude, especially when I remember the new friends I’ve made. The months seemed to fly by, as if on skates. It was late fall before I realized that I hadn’t sent a recent newsletter, so I have some catching up to do.

About mid-summer, I learned that Gretchen Simard, a former physical education teacher for Chesterfield County, was coordinating a trip to the International Children’s Games, a worldwide competition among teen athletes that has been held for the last 15 years in various parts of the world. Gretchen founded Team Chesterfield in 2004 and has led youth teams every year thereafter. The current team, with students from the regional area, was scheduled to compete during July, in Kaunas, Lithuania, which is the setting for both Izzy’s Fire and The Little Lion.

I called Gretchen and offered to teach the athletes, as well as parents and coaches also going, a few Lithuanian phrases that might come in handy. Ausra Huntington, a native and former teacher of Lithuania, who now lives in Bon Air with her husband, Lee, joined me. I became so enamored with the project that I ended up going with them. It proved to be a wonderful opportunity to not only support the team and see teenagers compete from all over the world, but I was also able to visit many Lithuanian friends whom I had not seen since 2014. 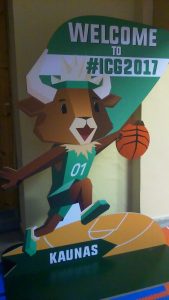 Although no member of Team Chesterfield won a medal, two of them turned in their best times in swimming and track events. While in Lithuania, the athletes enjoyed meeting a multitude of other competitors from abroad, visited castles, went kayaking and hiking, sampled local food, and even stayed in Belgium overnight  where we all indulged in the famous chocolate Belgian waffles and some shopping before heading home.

When I first met the athletes, I described a Rotary International (RI) project I had helped initiate in Kaunas a few years ago. Brandermill Rotary of Midlothian, which is my club, and Rotary Club of Kaunas, as well as the Chicagoland Rotary Club of Lithuanians of Downers Grove, IL, joined forces to help initiate a RI grant in the amount of almost $12,000. The funds were used to purchase physical therapy equipment, which was given to Lopselis Children’s Rehabilitation Hospital  (an institution that has been in existence in Kaunas almost 100 years) to assist local children with special problems. While there this time, I presented Audrone Prasauskiene, director of Lopselis, with a plaque commemorating the donation.  Arvydas Sabrinskas, former president of Kaunas Rotary as well as Giedrius Sidaravicius and his wife, Ieva Sidaraviciene, who originally helped with the project, also joined me for the presentation and to discuss a future project for Lopselis. 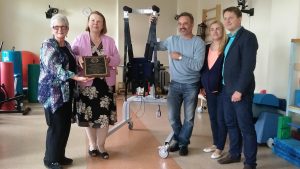 Presenting the plaque at Lopselis

Team Chesterfield reserved some time to visit several of the twenty eight children living at the Baby House, which is located just behind the main building of Lopselis. The children squealed with delight, as members of Team Chesterfield delivered a treasure trove of gifts they had personally collected prior to the trip. It was a special day for all who participated, as you can see from the photographs. Next year, the games will be held in Jerusalem. I’m crossing my fingers that I can go again. 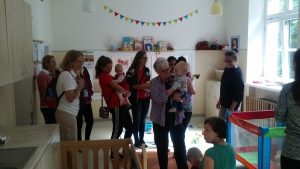 Student athletes, their coaches and parents joined me in visiting with the children in the Baby House at Lopselis. In the white shirt is Gretchen Simard, who led Team Chesterfield. 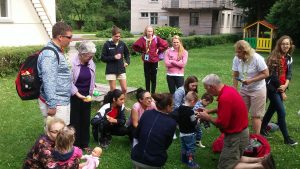 Sharing toys at the Baby House 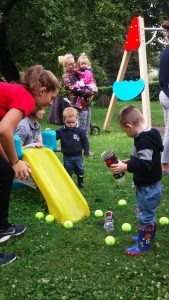 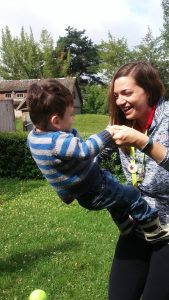 One baby preferred walking up legs to playing with the toys. 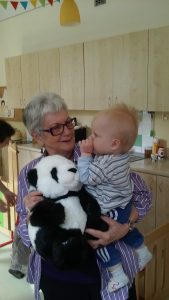 A wee one enjoys his thumb as much as his bear at the Lopselis Baby House.

Since I had some prior knowledge to the area, I was also privileged to give guided tours to the Ninth Fort, a place of historical significance during World War II. Everyone involved with Team Chesterfield toured the site which was the execution place for some 40,000 individuals, most of them Jews. While at the Ninth Fort, which has since been turned into a museum, we also visited the Hall of the Righteous, an exhibit set aside to honor non-Jewish individuals who saved Jews during the Holocaust. None of those individuals received any type of compensation, although they risked their lives to protect the Jews, most of them strangers. The pictures on the wall include the former pediatrician who directed Lopselis during the war. I didn’t know that history when I was working to raise funds for what is now known as Lopselis Children’s Rehabilitation Hospital. Also in the Hall of the Righteous was the mother of Virginija Mann, a friend of mine. Virginija’s mother, along with other family members, helped save eight Jews from Kovno Ghetto, which was located in Kaunas.  As fate would have it, Virginija and her husband, Barry, who now live in Utah, were in Kaunas visiting Virginija’ s family, so I was also able to catch up with them over lunch one day. 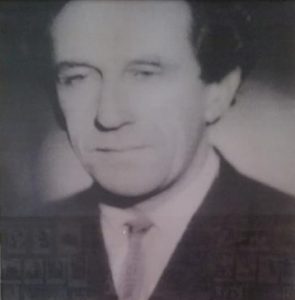 During the Holocaust in Lithuania, Dr. Petras Baublys, a pediatrician and director of what was then known as Lopselis Orphanage, provided a safe haven for Jewish children. He was later declared Righteous Among the Nations for his actions. 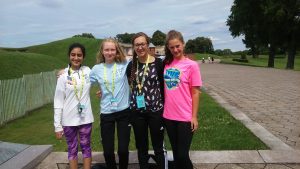 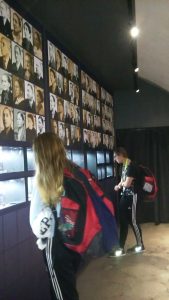 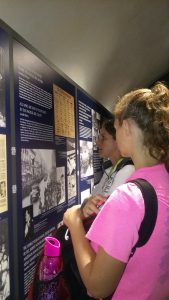 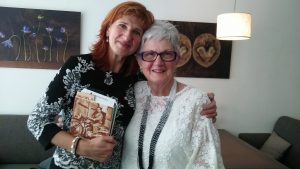 Ingrida Vilkiene, deputy director of education, International Commission for the Evaluation of the Crimes of the Nazi and Soviet Occupation Regimes (Vilnius, Lithuania) 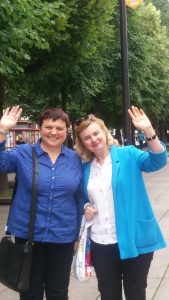 Irena Veisaite, a survivor of Kovno Ghetto and a dear friend, cooked dinner for me, which I enjoyed before visiting the Tolerance Center for the Vilna Gaeon Jewish Museum where I donated new copies of Izzy’s Fire and The Little Lion to Marcus Zingerus, executive director of the Tolerance Center, for their library. 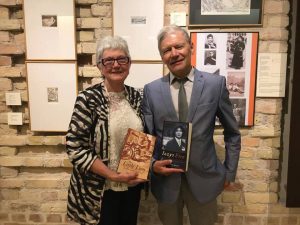 A very significant milestone was reached In September, when Mill Mountain Theatre brought The Little Lion to life again on Waldron’s Stage in Roanoke, VA. The play, inspired by my book of the same name and written by noted Richmond playwright Irene Ziegler, was presented this time as a dramatic reading, under the direction by Travis Kendrick. Travis just happened to have learned his trade while working under the tutelage of Tom Width, artistic director of Swift Creek Mill Theatre and the director of the world premiere of The Little Lion, which ran during the Mill’s 50th anniversary, from January 31 – March 7, 2016. 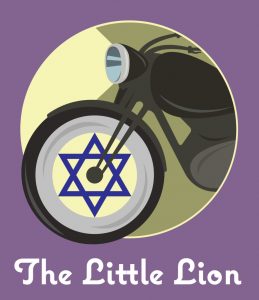 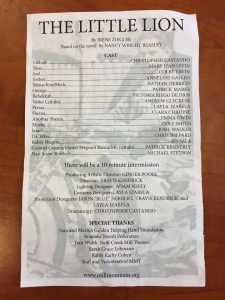 Playbill for The Little Lion

Guided by Travis, the depth of emotion displayed by the actors at Mill Mountain was breathtaking. They not only kept the sold-out audiences in suspense but, at times, brought many of them to tears. I was honored to share the stage with those talented actors as we participated in a talk back session where the audience asked questions following one performance.  Months later, I am still hearing from individuals who attended, including some of the fifty five students from Tina Tapp’s ninth grade English class at Radford High School. 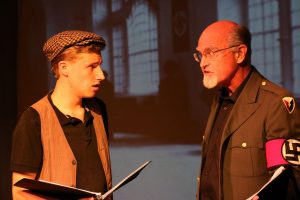 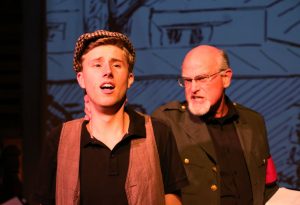 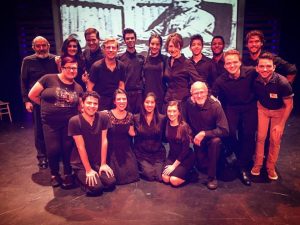 In the week prior to the play’s debut, I spoke to students in Tina’s class at Radford High, as they were studying The Little Lion. I also spoke to students in Dr. Melvin Macklin’s class at Ferrum College, who were likewise studying the book (for the second year), along with numerous other professors (some retired) and Ferrum students who joined us for the class presentation, dinner, and the play. I also gave presentations to Rotary clubs and public libraries in Roanoke and Radford. Another highlight was when I spoke from the pulpit at Rocky Mount Methodist Church, now pastored by the Reverend Will Waller, my former associate pastor in Richmond. 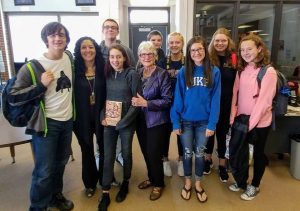 With Tina Tapp and some of her students 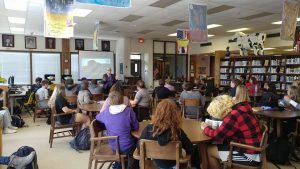 Speaking with the Radford High Students 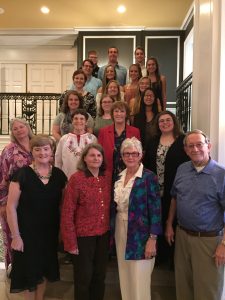 Special friends came from far and near to see the production. Barbara and C.N. Irby, whom I have known for over thirty years, drove in from Lynchburg, and Heidi Nunnally, whose mother (Frances Nunnally) is a survivor, came from Richmond to see the play a second time, along with a friend. Although numerous members of Temple Emanuel had driven from Roanoke to see the original stage rendition at Swift Creek Mill, they attended the performance at Mill Mountain as well. Special thanks to Rabbi Kathy Cohen. Not only did she lead the delegation to the first performance at Swift Creek, she encouraged Mill Mountain to stage the play. Longest-drive honors goes to Dr. Marcia Horn, who helped develop the Holocaust studies program at Ferrum College and has been an abiding inspiration to me since 2005. Marcia, now retired, drove from New Jersey, not once (to Swift Creek) but twice (to Mill Mountain), to see the play. There were many others who came as well, but space does not allow me to name them all. Just know that I so appreciate each of you. 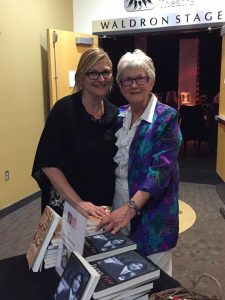 A few very special individuals must be singled out, though. Nancy Gray, retired president of Hollins University, had tears in her eyes when she gave me a hug after the first performance. “You must be so proud,” she said. When I told her that I was actually humbled, she said, “Then I’ll be proud for you.” 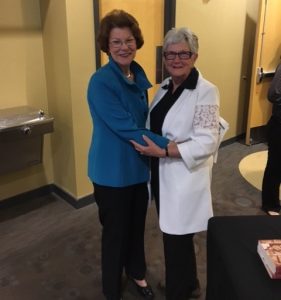 Another proud moment was when I posed with Travis Kendrick for a photo with Amanda Cockrell, Dr. Tina Hanlon, and Karen Adams. Amanda has directed the Master of Fine Arts in Children’s Literature at Hollins for the last twenty five years. Karen Adams, my thesis director, along with Dr. Tina Hanlon, my critical analysis advisor for The Little Lion, shepherded me through the thesis process. Without Karen and Tina, neither the book nor the play would have been a reality. I owe them a debt I can never repay. 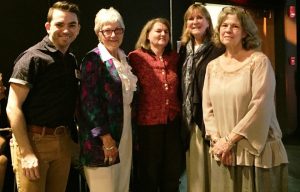 Numerous other books signings and presentations across the state, and even in Alabama, kept me busy. None was more meaningful that the one hosted by Friends of the Blackstone Library in early November. After enjoying an evening of fellowship, they treated me to an overnight stay at the Grey Swan Inn, a bed and breakfast in Blackstone. The accommodations were not only outstanding, but Mandy Sikorsky, who was keeping the inn that night, introduced me to her favorite friends. They happened to be chickens…yes, chickens. Mandy not only cooked me sumptuous food from homegrown veggies, she regaled me with tales of her chick friends and then even sent me a photo of two of them, as yet unnamed. I’m going to suggest Tweedle Dee and Tweedle Dum. 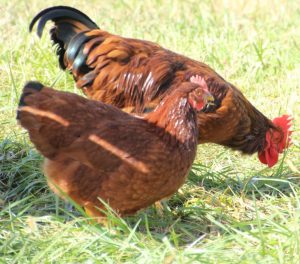 As 2017 comes to an end, I want to honor a very special friend, Alan Zimm, a 96-year-old who survived the Holocaust. Mr. Zimm was my original inspiration for starting this work twenty years ago.

On November 12, 2017, a photo was taken of Mr. Zimm, me, and my dear friend, Inge Horowitz, marking the special anniversary.  Mr. Zimm changed my life and work forever almost exactly twenty years earlier on Sunday, November 9, 1997. At the end of annual service at Emek Sholom Holocaust Memorial Cemetery, a diminutive, soft-spoken Mr. Zimm walked to the microphone, the last individual to do so before the conclusion of the service held each year to commemorate many of the Jews lost during the Holocaust. I had never met Inge, who coordinated the service, or Mr. Zimm. He reverently recited the names of many family members, including his parents and several siblings who died in the Holocaust. Mr. Zimm, the first Jew I ever met in Richmond, told me later that afternoon that only he and one brother had survived. His brother had recently died, leaving Mr. Zimm the sole survivor of a huge and loving family whose fate was sealed by having been born Jewish in Poland. I told him that his witness had changed me forever. Little did I know how long and difficult that change would be and how it would affect me or my work. 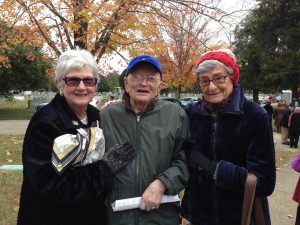 With Alan Zimm and Inge Horowitz

Two books and one play later, I stand ready to embark on yet another venture. Pray for me, please, as there are special challenges waiting in 2018, and I’ll need all the strength I can muster to carry them out.