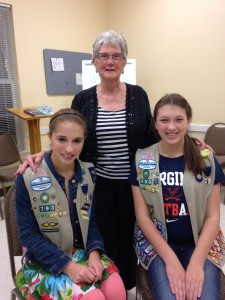 (L-R) Abigail “Abby” Reasor and Kaitlyn Sorenson and I share a moment after the presentation.

When Kaitlyn Sorensen and Abigail “Abby” Reasor  became friends at the age of 3, they couldn’t have imagined their friendship might eventually have national significance.  Their Sunday School class at Fairfield Presbyterian Church in Mechanicsville, VA, became a touchstone for their early lives, along with their decision to join a Daisy troop, the beginning level of Girl Scouts.

In 2013, during the 100th anniversary of the Girl Scouts of  the Commonwealth of  Virginia (GSCV), Kaitlyn and Abby, who were then 13, set out to try and make history by developing a program that will result in a Girl Scout patch in Holocaust education. The idea was born after they and their mothers visited the Virginia Holocaust Museum and read  Izzy’s Fire.

Anne Sorensen, Kaitlyn’s mother, asked me to do a presentation on Izzy’s Fire in conjunction with Kaityln’s Troop 280 whose members were working on their “Once Upon a Story” badge.  The members of Troop 793, the troop which Mrs. Reasor leads and Abby belongs to, also attended the presentation.

After more than 50 years, I couldn’t believe I still remembered the Girl Scout Promise I recited as a Girl Scout affiliated with Providence Methodist Church in Chesterfield County. It was so impressive to see young women still involved in an organization that expects them to complete projects which take great effort and have lasting significance.

Now an 9th grader who attends Atlee High School, Abby said she learned about the Holocaust in 7th grade at Chickahominy Middle School, which sponsors a field trip every year to the Virginia Holocaust Museum. I have spoken about my book at Chickahominy several times.

“After reading Izzy’s Fire, I found it interesting that somebody would want to get rid of a group of people just because he didn’t like them,” Abby states. “Even if they’re different, they should have been treated like human beings.”

Kaitlyn, a former student at Oak Knoll Middle School  and now in the 9th grade at Hanover High School, will assist her best friend in developing the model for the patch, which Abby will use to earn her Silver Award, the highest level a cadet Girl Scout can earn.

“Oak Knoll had a field trip every year where we spent half a day at the Virginia War Memorial and the other half at the Virginia Holocaust Museum.  After the field trip, I went for a sleepover with Abby. When I  got into her car and Izzy’s Fire was on the seat, I learned that Mrs. Reasor and I were both reading it. I was really interested in it because my mother’s grandparents came from Lithuania [where the book is set].

“I’ve heard some people believe the Holocaust was a hoax,” Kaitlyn continues. “The patch will help prove that it wasn’t. All my life I’ve heard how I should treat others like I want to be treated. I would like to think that I would have been one of the rescuers.” 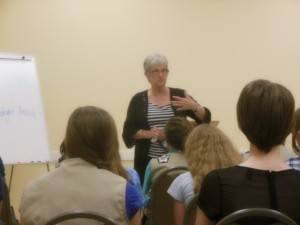 “We learned there was only one Girl Scout Holocaust patch,  in Texas,” Abby adds.

“We wanted one that could be earned in Virginia, so we contacted our council and met with Aaron-Paula Thompson, who organizes the programs for different ages of Scouts.”

Megen Ferenczy, director of education at the Virginia Holocaust Museum, is excited about the joint venture as well. “Even though the Holocaust occurred over 70 years ago its lessons of tolerance, morality and civic engagement are still relevant today.”

Requirements for earning the patch will be such that any Girl Scout, regardless of where she lives, could attain it by completing the requirements through the Internet. The girls will follow the model of  “Discover, Connect, and Take Action” and concentrate on what girls can learn about the Holocaust, how it relates to their lives today (i.e. tolerance, bullying), and what they can do to further the message.

“We’ll make a list of objectives that must be done to earn the patch, like visiting the Virginia Holocaust Museum, reading Izzy’s Fire or a compilation of different things” Kaitlyn explains. “Abby will be doing the work, and I’m there to assist her.”

The Girl Scout Council must approve the plan for the patch, while partnering with the  museum. One of the requirements for the Silver Award is that whatever project the Scout does must be sustainable and have longevity. Kaitlyn has already earned her Silver Award.

Viola Baskerville, executive officer of the GSCV is not surprised at Kaitlyn and Abby’s determination.

“This was the dream of Juliette Gordon Lowe, the founder of the Girl Scouts, to have an organization that is inclusive,  helps the girls find their voice and take courageous actions to make the world a better place. We have 12,000 girls in our council. That’s 12,000 future women who can change the world.”

Kaitlyn and Abby plan to become literature teachers. Stay tuned. I believe I’ll write about them again. After all, they are the type of young ladies that Baskerville was referring to — ones that change the world.

(Photos for this article were provided courtesy of Anne Sorensen.)