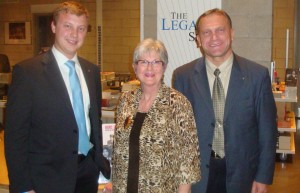 (L-R) Alexsas Modestas and Sal Janusonis of Chicagoland-Lithuanians Rotary Club, joined me in Skokie, Il (Nov 2010), when I spoke on "Izzy's Fire" at the Illinois Holocaust Museum & Education Center.

Fresh beginnings are important, but it’s also a time to give credit for the past. Skaiste Aniuliene, Consul General for the Republic of Lithuania in Chicago, invited me to speak several times in November 2010, in accordance with the Lithuanian Parliament’s declaration that 2011 would be a year of remembrance for Holocaust victims. I was honored to share the story of “Izzy’s Fire” and the courageous Catholic farm family from Lithuania who saved the 13 Jews I wrote about.

I had the privilege of speaking at the Illinois Holocaust & Education Museum (Skokie, IL), the Balzekas Lithuanian Cultural Museum (Chicago, IL) and at the University of Chicago, in the class taught by Professor Giedrius Subačius. Later, I also spoke at the Holocaust Memorial Center at Farmington Hills, MI, the first Holocaust museum to be built in the U.S.

Each time I give a presentation, I learn that “Izzy’s Fire” continues to be meaningful and I’m encouraged to find many readers interested in the story. While the Holocaust as a whole is overwhelmingly tragic, we cannot lose sight of the few courageous individuals who risked their very lives to save Jews who were such hateful objects of discrimination. It is through programs like the ones sponsored by the Lithuanian Consulate that their story continues to be heard. 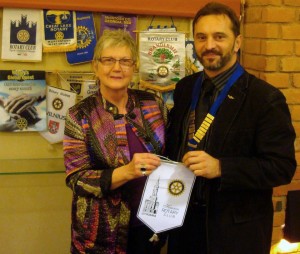 Arvydas Sabrinskas, president of Kaunas Rotary Club in Kaunas, Lithuania in 2009, presenting his club flag. Behind us hangs the Brandermill Rotary Club flag.

The New Year will bring a new challenge, that of bringing to fruition the joint project of three Rotary clubs that’s been in the making for some time. Following my visits to Lithuania in 2009 and 2010, where I spoke at the Kaunas Rotary Club, I was introduced to the Chicagoland Rotary Club of Lithuanians (by telephone). That club is made up of all Lithuanians who now reside in Chicago. I subsequently spoke at their club and asked them to join with my club, Brandermill Rotary (Midlothian, VA) on a project to benefit children in an orphanage in Kaunas. It is my joy to include a link to the story from www.rotary.org about the new formation of the Triple Sister Clubs Project.