Author is Guest Speaker at Eliezer: the Jewish Society at Yale 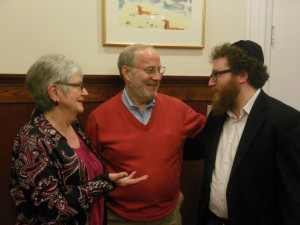 Having a great conversation with Professor Eugene Fidell, Senior Research Scholar in Law & Florence Rogatz Visisiting Lecuturer in Law at Yale University and Rabbi Shmully Hecht, one of the founders of Eliezer: the Jewish Society at Yale 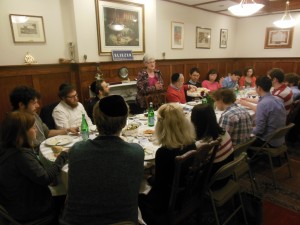 One of the highlights of 2014 was  the privilege and honor to be a guest speaker at a dinner hosted by Eliezer: the Jewish Society of Yale in New Haven, Ct. The society, formed in 1966, started out as a social club for would-be and current leaders of the Yale community but has blossomed into an nonsectarian  intellectual organization recognized the world over, hosting speakers such as Senator Joe Lieberman.  Speakers for the intimate dinners are provided housing in their lovely brownstone, which was fully equipped with food and drink of all kinds. The kosher dinner was wonderful, enhanced by the conversation of Rabbi Hecht, as well as several Yale students and professors. When it snowed, I stayed another day, enjoying their hospitality even more. Eliezer has recently changed its name to Shabtai: the Jewish Society of Yale, and has moved to a new location, but they will remain in New Haven.