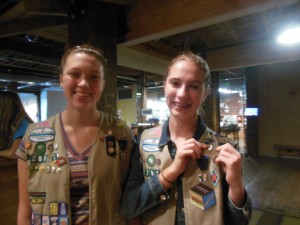 Abigail “Abby” Reasor (pictured on the right) recently earned her Girl Scouts of America Silver Award by developing the first-of-its-kind Holocaust education patch in Virginia. Abby is a member of Troop 793, which is led by her mother, Erin. Abby was assisted by her best friend, Kaitlyn Sorensen (pictured on the left), member of Troop #280 whose mother, Anne, is troop leader for that group.  Both troops meet in Mechanicsville. Abby diligently researched and implemented the first Holocaust Education Patch for Girl Scouts in Virginia and worked in conjunction with Megan Ferenczy, director of education at the Virginia Holocaust Museum (VHM) in Richmond, VA, who helped formulate the program.  Abby recently introduced her new program to several scouts at the museum. Part of the requirements for the patch, which include choosing between numerous tasks to complete the patch and also includes reading from a variety of books, like “Izzy’s Fire.” Another part of the patch involves a scavenger hunt at the VHM, as well as attending a Kristallnacht service, such as the one held each November in Richmond at the Emek Sholom Holocaust Memorial Museum to memorialize victims of the Holocaust. 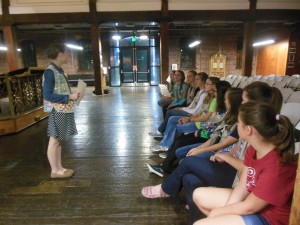 Abigail “Abby” Reasor speaks to the first group of Girl Scouts who have begun work on the Holocaust Education Patch in Virginia.

Megan interacted with the scouts, answering questions and guiding them in their quest for information throughout the museum. They also heard from Inge Horowitz, president of Emek Sholom, about the history of Kristallnacht and the  memorial service that’s held each November at the site in Richmond located at Forest Lawn Cemetery.

As a former Girl Scout, I am so proud of these young women and thrilled that Girl Scouts are still building good will in their community and around the world. The new program can be accessed by other  Girl Scouts in other states via www.comgirlscouts.org. To date, only two states offer patches for Girl Scouts in Holocaust education: Texas and now Virginia. Hearty congratulations to Abby and a big thanks to Kaitlyn for supporting and helping her friend, Kaitlyn has previously earned her Silver Award as well.

(L-R) Erin and Abby Reasor, Kaitylyn and Anne Sorenson go over some plans for the new Holocaust education patch with Megan Ferenczy, director of education at the Virginia Holocaust Museum in Richmond, VA. 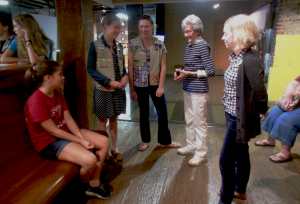 Inge Horowitz (in striped shirt),, president of Emek Sholom Holocaust Memorial Cemetery, described some of the Kristallnacht services that are held in November each year at the cemetery in Richmond to honor the victims of the Holocaust. Attending a Kristallnacht ceremony is one of the several options available to Girl Scouts to attain their Holocaust education patch.